The country faces the worst political crisis and divisions among the clans in history during Farmajo's tenure 2017-2021. 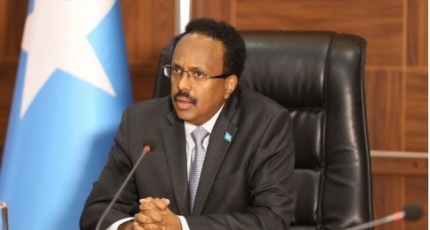 MOGADISHU, Somalia - As a tactic to stay in power, the outgoing Somali president Mohamed Abdullahi Farmajo is sowing divisions, disputes, and clan conflict in to delay the elections, said opposition.

During a meeting in Mogadishu, the union of the opposition presidential candidates issued a strong-worded statement on the election standoff which has thrown the country into a constitutional vacuum and uncertainty over the future.

The opposition said Farmajo, who is eyeing a second term in office doesn't want Somalia to go to free, fair, and inclusive elections after failing to extend his 4-year mandate by two more years.

The candidates, including two former presidents - Hassan Sheikh and Sheikh Sharif as well as ex-PM Hassan Ali Khaire announced that they will make every possible effort to realize the dreams of the people for peaceful and democratic polls.

"We're now in talks with the leaders of the five Federal States to find a common solution to the differences over the newly proposed Lower House election framework," the statement reads in part.

The Lower House vote is facing challenges, including a dispute over its process after the Federal States and PM Roble agreed to disband the registered 135 traditional elders who have been the basis for the selection of the electoral delegates picking the lawmakers since the 2016 election.

The sitting president plotted new controversy and division among the leaders that led to failing the joint committee made up of six members - three from the opposition and three from the regional states who were tasked to resolve the stalemate.

Some of the regional heads are close allies of the outgoing president and they have been working on his re-election for the past two years by preparing loyal MPs to vote for him in the upcoming presidential election.