Farmajo claimed the foreign policy has improved during his chaotic presidency as the country's ties with neighboring countries have been at the lowest point. 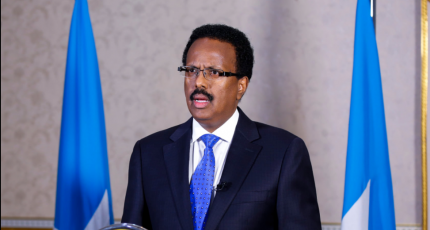 Farmajo has made a rare and unexpected welcome of the outcome of the National Consultative Council meeting held on January 3-9 on the expedition and transparency of the elections.

He has called on the leaders of the Federal States to play their part in accelerating the elections and warned the officials against misappropriating the public funds for electoral purposes.

Farmajo claimed the foreign policy has improved during his chaotic presidency as the country's ties with neighboring countries, including Kenya and Djibouti have been at the lowest point.

Somalia's government severed historic relations with Saudi Arabia and the United Arab Emirates [UAE] after siding with Qatar during the GCC diplomatic crisis that began in June 2017.

Farmajo never mentioned the name of the Prime Minister of Somalia Mohamed Hussein Roble in his speech due to the differences between the two leaders in deadlock over the election.

The PM has accused the term-ended president of violating the constitution and attempting to overthrow his government twice last year, in an attempt to disrupt the ongoing elections.

After his term ended, Farmajo has been working tirelessly plot to stay in power beyond his mandate and divided the national army into clan lines, risking the country's fragile stability.

The international community says it is time for all Somali leaders to focus on the speedy implementation of the agreed decisions to conclude a credible electoral process by February 25th in line with the recent agreement by PM Roble and the heads of the five regional states.

The US has threatened to take action against any leader who violates Somalia's electoral process and urged all sides to avoid provocations that might ignite violence in Mogadishu.