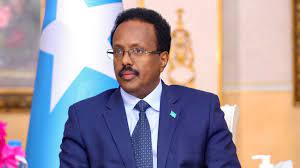 MOGADISHU, Somalia - The political battle between Farmajo and Roble is taking on a new dimension, as mediation between the two leaders over the removal of Fahad Yasin begins.

Sources close to the presidency revealed to Keydmedia English that the outgoing president gave up his fight to win the brawl as he asked the deputy House speaker to mediate the rift.

Abdiweli Mudey, the 1st deputy speaker of the Lower House chamber of the outgoing 10th parliament commenced the mediation on Monday after a meeting with the prime minister.

According to sources, Farmajo decided to rescind his rejection of Fahad's dismissal and order to continue working as NISA Director and opted for the case to be ended through dialogue.

After facing strong opposition from the people over his move to block Prime Minister Roble's move to seek justice for Ikran Tahlil, who was kidnapped on June 26 and then murdered.

Fahad was replaced with Gen Bashir Goobe, and is feared to be put on trial as he is the man suspected of being behind the abduction and killing of NISA's cyber-security expert.

It is unclear if the ongoing mediation will succeed as PM Roble is under growing pressure from the public and the opposition candidates to ensure justice for the missing spy agent.