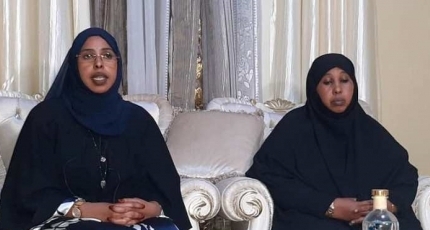 MOGADISHU, Somalia - The Outgoing Somali President Mohamed Abdullahi Farmajo has been accused of obstructing the investigation into the murder of Ikran Tahlil, a member of NISA.

Amina Mohamed Abdi, who was a member of the former immediate Somali Federal Parliament has described numerous instances in which Farmajo may have hindered justice for Tahlil.

She told reporters in Mogadishu on Saturday that the investigators had been denied access to the NISA HQs to interview the main suspects, including Yasin Farey and Abdullahi Kulane.

Also among the prime suspects in the Ikran's killing is Fahad Yasin, who was appointed by Farmajo as his national security adviser to escape justice after being fired as NISA boss.

Abdi added that Fahad and his team destroyed every available evidence on NISA computers and CCTV cameras, which is a disappointment for the Ikran family who is fighting for justice.

The former lawmaker made the remarks while sitting next to Ikran's bereaved mother Qaali Guhad, who met again with PM Roble who is at forefront of the efforts to prosecute the killers.

Ikran, 25, went missing in June 2021. She was last seen in CCTV footage while riding a NISA Totoya Hilux vehicle from her house near the Intelligence HQs to Godka Jilacow prison.

She was reportedly killed for holding sensitive information about thousands of young Somali soldiers sent to Eritrea in 2019 and 2020 by Fahad Yasin for training but never returned home.