Farmajo loyalist arrested in Kenya, his life is in danger - family

The Kenyan-based scholar is known for his extensive analysis of Somali politics, in particular the squabble between the prime minister and the outgoing President Farmajo. 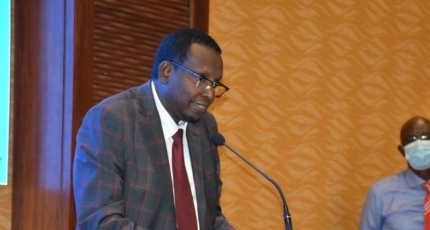 NAIROBI, Kenya - Kenyan security forces have arrested Abdiwahab Sheikh Abdisamad, a staunch supporter of Somalia’s outgoing president Mohamed Abdullahi Farmajo whose relationship with Uhuru has been at a lower point since early this year.

According to his family, armed plain-clothed Kenyan officers raided the scholar’s residence in Nairobi on Wednesday and then taken the prominent academic to an undisclosed location inside the country.

It remains unclear the motive behind the arrest of Abdisamad as Kenyan security officials are yet to comment on the matter. However, his family said they have submitted a missing report to the police.

“We’re worried about the safety of our father… We feel that his life is in danger as his whereabouts are unknown since his abduction last Wednesday from his house here in Nairobi,” said a family member.

The lecturer was known for the blatant criticism against Somali PM Mohamed Hussein Roble in support of Farmajo amid a fallout between the two leaders whose ties were severed by the dismissal of NISA boss Fahad Yasin.

Yasin who is Farmajo’s right-hand man faces accusations that he was behind the murder of Ikran Tahlil, a senior intelligence agent who headed NISA’s cybersecurity depart for 3 years before her disappearance last June in Mogadishu.

The Nairobi-based lecturer on Villa Somalia payroll has been a fierce critic of Somali PM Roble and the United Arab Emirates [UAE], which he blamed for being responsible for the recurrent political crisis in the Horn of Africa country.

UAE’s role in Somalia weakened since the outbreak of the Gulf diplomatic crisis in June 2017 after Farmajo’s administration sided with its rival Qatar which has funded his election in the same year through Fahad Fahad, the former Al Jazeera Arabic journalist.

Somalia became the battleground of the battle between the warring Gulf countries with the UAE worked on the division of the Federal States and the central government based in Mogadishu.

UAE invested in key ports on the Gulf of Aden in Puntland and Somaliland with hundreds of millions of US dollars after disbanding all its operations in the capital due to the hostile actions by Villa Somalia.

The relations between Abu Dhabi and Mogadishu worsened after more than $9 million was seized at Aden Abdulle International airport. UAE argued that the cash was meant to pay salaries of sections of the Somali military it trained