The country's PM has already appointed an inquiry body to look into the reported murder of Ikran Tahlil went missing last June in Mogadishu. 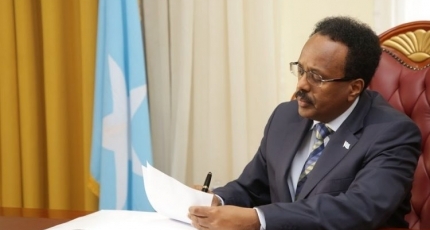 The disappearance of the NISA agent has sparked political controversy in Somalia and led to a deadlock between PM Mohamed Hussein Roble and Farmajo who disagreed over the probe.

The body is chaired by the country's attorney general and is deputized by the chief of the military court, while the three members are coming from the police, NISA, and the military.

In a statement obtained by Keydmedia Online, Farmajo has urged the committee to hand over the findings and evidence to responsible legal institutions for the execution of Justice.

This comes as Ikran's case is already residing with the military court after her family's lawyer submitted a lawsuit. Farmajo's move is seen as a bid to plunder the ongoing investigation.

The PM also named this week a team to launch a transparent and immediate probe into the girl's mysterious death which became a sensitive issue that attracted international attention.