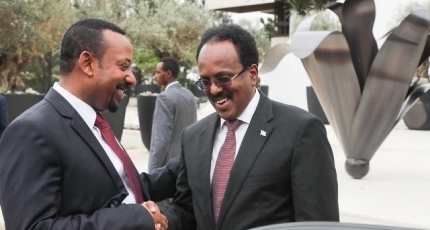 In a Twitter post, Farmajo said Somali will continue to work with Abiy's government to further strengthen the bilateral relations between Somalia and Ethiopia and the wider East Africa.

"I warmly congratulate PM Abiy Ahmed on regaining a strong mandate from the people of Ethiopia," Farmajo tweeted on Sunday.

Farmajo has been a close friend of Abiy for the past three years, with the two leaders and Afwerki signing a 2018 security cooperation agreement in Asmara following talks.

Under the deal, Farmajo sent thousands of Somali soldiers trained in Eritrea to the Tigray region late last year to take part in the Ethiopian defense forces battle against the TPLF.

The Somali soldiers are still missing, and reports say most have died in the Tigray fighting, while some have been captured as prisoners of war [POWs] by the TPLF which has recently paraded thousands of alleged Ethiopian forces in Mekelle after capturing the city.

Opposition presidential candidates in Mogadishu have accused Farmajo of committing war crimes and treason in Somalia after secretly sending troops to Ethiopia to take part in a foreign conflict instead of fighting the internal enemy, Al-Shabaab posing threat to security.