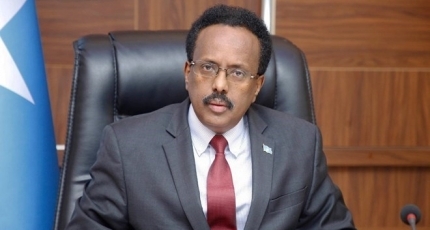 MOGADISHU, Somalia - Amid a growing dispute with the PM, the outgoing president Mohamed Abdullahi Farmajo is reported to be plotting a decision to sack a top military court judge.

Multiple sources revealed to Keydmedia Online that Farmajo is having final consultations with his team over the removal of the military court chief Colonel Hassan Ali Nur Shute from office.

Farmajo is likely to announce the dismissal statement in the coming hours or days. The family of Ikran Tahlil asked the term-ended president to stop disrupting the justice for their daughter.

The move is seen as an attempt to "obstruct" a high-profile investigation into the fate of an intelligence agent whose disappearance sparked a public outcry and political crisis in Somalia.

Shute is the man tasked with investigating Ikran's case by PM Roble. Farmajo has been warned against taking the irresponsible decision that could lead the country into a civil war.

The outgoing president has already created confusion in the investigation process after rejecting the sacking of Fahad Yasin, the main suspect in the murder case by the prime minister.

The NISA female officer was abducted and reportedly killed by the heads of the spy agency as the girl has had sensitive information about the recruitment of missing soldiers in Eritrea.