The attacks like this became increasingly alarming as al-Shabab insurgents are indiscriminately targeting almost every top member of the government. 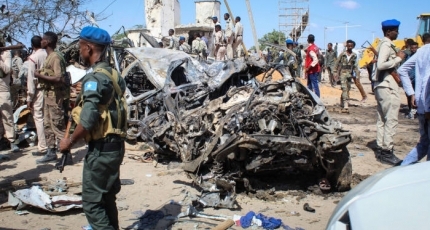 MOGADISHU, Somalia - A police official says 4 people were killed and several others wounded when an improvised explosive device [IED] ripped through a vehicle in Mogadishu.

A witness said the IED struck a car carrying the Secretary of Dayniile District in Mogadishu, Mahad Sharawe while driving in the vicinity of the DC’s office.

Sharawe has narrowly escaped unhurt from the explosion which claimed the lives of civilians, including women and children at a nearby sprawling market.

"A mother breastfeeding mother and her newly-born child died in Today's explosion in Deynile district. This was a horrific and unfortunate incident," said Ahmed Hassan, a police officer who spoke to KON.

There was no immediate claim of responsibility for the attack which comes amidst the worsening security situation in the Somali capital which is now hosting key electoral talks between the country's political stakeholders.

Last weekend, a top security official named Ali Bariise has been killed in the district after his car blown up by a landmine.