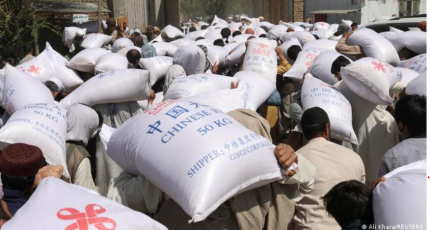 A few hours earlier, the fridge had been filled with butter. Many, many little glasses, each holding its own cold, golden clump, now all gone. The waitress apologizes profusely after I approach her with my question and my plate of bread and cheese.

The buffet needed to make space for the rows and rows of pudding — vanilla with red currant, chocolate with cookie — brought out as an afternoon snack. I assure her I'll survive until the catered dinner in an hour, and exit the Bavarian banquet hall, past baskets of pretzels, towers of tiny salads, and bowls of purple, yellow and beige hummus.

As host of this year's Group of Seven (G7) summit, Germany has spared no expense, at least not on catering. But as journalists choose between spaghetti bolognese and sweet potato curry, the world leaders they're here to cover are hidden away in a castle up in the nearby mountains, trying to solve world hunger.

The United Nations has warned that the world is facing an "unprecedented hunger crisis," with around 180 million people expected to face a food crisis this year. Some 750,000 people living in Ethiopia, Yemen, South Sudan, Somalia, and Afghanistan are currently at risk of starvation and death, UN Deputy Secretary-General Amina Mohammed said in New York on Tuesday.

"When somebody is hungry, nothing else matters. Nothing," Edwin Ikhuoria, Africa executive director of the ONE Campaign, a nonprofit that fights against global poverty, said in an interview near one of several snack bars at the G7 press center.

People knew this crisis was coming, he said, after it failed to rain for several farming cycles in a row.

"You know what that means?" he said. "There is no harvest. Communities as a whole migrate to other places where they can find food. Livestock is practically dying on the field because there is no grass."

Russia's invasion of Ukraine has made an alarming situation worse. Sanctions and fighting have disrupted the cultivation and shipment of commodities like wheat and sunflower oil out of both countries, both major food exporters.

Getting grain exports out of Ukraine is a central focus at the G7 summit, Chancellor Olaf Scholz told German public broadcaster ZDF from Schloss Elmau, the Alpine hotel where the leaders congregated. "Negotiations are ongoing day and night," he said.

The summit participants discussed making funds available to tackle a looming starvation crisis in many countries. Shortages and the high cost of energy, also partly due to the war, have pushed up food prices around the globe, hitting the poorest countries the hardest.

Poor people in African countries where the price of food has gone up so high are sometimes pushed to sell household items in order to be able to buy food, said Ikhuoria.

"This is a disaster," he said. "This can breed real social unrest and instability. Think about the Arab Spring. It was food prices that really sparked that."
Before attending the G7, Senegalese President Macky Sall said Russia had 'reassured' him on food security

He hoped the G7 and its guest countries and organizations would come away from the summit with funding and a tangible plan for how to help countries in need secure food supplies. Global Citizen, an NGO fighting poverty, has called on the group to provide "several billion" to kick-start efforts to fight global hunger.

Ikhuoria also hoped the leaders would come up with a plan for how to negotiate the opening of the Black Sea corridor to get vital shipments of grain out of Ukraine.

In a step in that direction, the G7 on Monday called on Russia to cease attacks on agricultural infrastructure and allow agricultural shipping from Ukrainian ports in the Black Sea.

"Russia is responsible for this dramatic crisis, not international sanctions," German Foreign Minister Annalena Baerbock said at a recent food security conference. "We know about indirect negative sanctions effects and we acknowledge them. However, they are much smaller than the brutal actions of Russia, which uses hunger as a weapon."

On Sunday, the G7 unveiled its new plan for investment in global infrastructure. But the beneficiaries will be waiting to see concrete results.

Ikhuoria said that because of foreign aid contributions, there had long been an assumption that Africa would always support the West. But Chinese investment in the continent and Russia's invasion of Ukraine had changed that dynamic.

"The truth of the matter," he continued, "is that Africa does not mind multiple partners … The more the merrier, right? So it's not like one for the other. It's really about: how do we get Africans to utilize the opportunities it has and not force them to choose a side?"

This is already the second batch of Ukrainian wheat for Somalia. In autumn, a ship loaded with 28,500 tonnes of wheat left the Pivdennyi port as part of the "grain initiative".

China looks to outflank US in Africa as Somalia faces terrorism, drought and famine