UN says the IDPs are living in dire conditions in the rural areas around the central Somali city and they urgently need food, shelter, and drinking water. 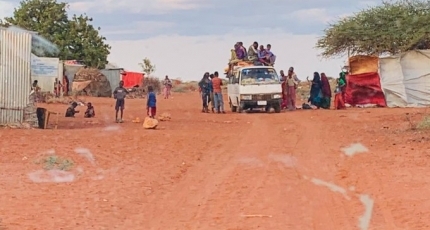 GURI'EL, Somalia - Amid escalating violence that erupted early this month in the Galmudug state of Somalia, the UN OCHA said the conflict has displaced over 100,440 people within days.

The people, including women and children, fled their houses in Guri'el town in Galgadudu, central Somalia to nearby rural areas that were already facing looming drought and water shortage.

The office of UN OCHA in Somalia said the aid agencies are responding to the humanitarian crisis of the IDPs despite facing funding constraints that limit their action capacity at the moment.

The displacement of the people is on the rise as the situation has been tense in the central town after the Ahlu Sunna group seized control from the Somali government troops on October 1.

There are growing fears of bloody war as the SNA and Galmudug forces approach the town of Guri'el, preparing to launch an offensive against Ahlu Sunna forces in control of the town.

The situation is deteriorating as mediation efforts to stop the government offensive against Ahlu Sunna have failed. Farmajo was accused of using the SNA to ignite a civil war in Galmudug.