Galmudug leader links journalists to terrorists for their work

He has accused the independent journalists of spreading Al-Shabaab propaganda by covering news related to the terror group’s attacks in Galmudug territory. 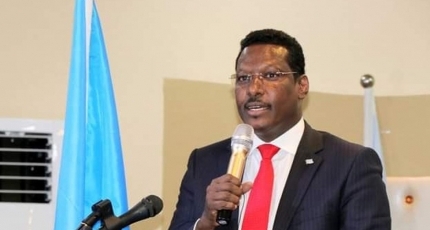 GALKAYO, Somalia – The leader of Somalia’s Galmudug State Ahmed Abdi Karie known as [Qor-Qor[ has put local journalists at risk after publicly linking them to the terrorist group Al-Shabaab.

The leader made the remarks during his speech at a mourning event held for senior army commanders killed in the Al-Shabaab suicide bomb attack outside a soccer stadium in southern Galkayo last December.

He has accused the independent journalists of spreading Al-Shabaab propaganda by covering news related to the terror group’s attacks in Galmudug territory.

Qor-Qor made the allegations without even providing single evidence and this is described as a clear indication that the current Galmudug administration is very harsh to the journalists and the media.

The regional president banned the local reporters from coverage of the stories about Al-Shabaab and the reporter refused to abide by the order will face detention, fines, and other severe punishment.

Galmudug's leadership failed to fix security and economic challenges in the region with the president who is in office for one year pays frequent trips to Mogadishu and spends less time to serve his people.

The Federal Government of Somalia and its the Federal Member States have faced growing criticism over human rights violations and abuses, including attacks on the press and journalists in the country.

Somalia is ranked one of the most dangerous places in the world to be a journalist due to the conflict and lawlessness. Since 1992 over 70 media workers have been killed, 10 of them in the last three years.

2020, Amnesty International released a report entitled "We Live in Perpetual Fear," detailing harassment, intimidation, and killings of journalists by Al-Shabab and security forces.