Galmudug has been embroiled in wars and internal disputes since its re-establishment in 2014 that making it one of the weakest states in Somalia. 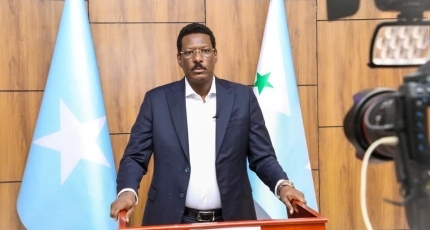 The state president blamed Ahlu Sunna for being responsible for the hostility after it rejected Galmudug's 22-day call to leave the town and restore the previous local administration.

Meanwhile, Ahmed Qoor-Qoor said that foreign governments and regional states in Somalia are part of the conflict after they helped Ahlu Sunna return to Galmudug after nearly 2 years.

He declined to name the governments and states behind the Sufi group's comeback but said they had evidence. In past, there were reports that the group received arms from Puntland.

The Somali government is said to be assisting Galmudug in the fight against Ahlu Sunna in Guriel, sending Turkish and US-trained troops [Gorgor and Danab] from Mogadishu by planes.

The United Nations [UN]'s OCHA says more than 100,000 people have been displaced from the city by the soaring conflict, forcing them to seek shelter in the drought-stricken suburbs.

The two sides are in the city and are receiving reinforcements, according to the journalists on the ground. On Monday, two main hospitals and an NGO office were bombed during a battle.