Al-Shabaab was driven out of key areas in the southern Mudug region during a massive military operation carried out by SNA and Galmudug troops. 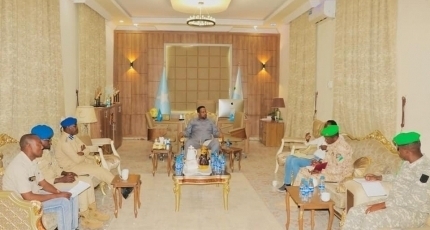 Tuesday's announcement came after the state's vice president Ali Dahir has called for an emergency security meeting in Dhusamareb town to plan the second phase of the assault.

Top security and military chiefs have attended the key meeting, who briefed Dahir on the gains made against Al-Shabaab during the latest operations in the southern Mudug region.

"In the coming days, Somalia's armed forces with the support of Galmudug's Darwish troops will launch an attack aimed to flash out Al-Shabaab from the entire regions," said the VP.

He added that security in the Gamudug capital and the nearby villages will be beefed up to avert terrorist attacks from Al-Shabaab during the forthcoming Lower House election.

Meanwhile, Dahir has thanked the Puntland state for the military support it provided to Galmudug which boosts the cooperation between the two sides in the fight against terrorism.

The SNA and Galmudug troops have managed to recapture key areas in the Mudug region from Al-Shabaab in the past two months but failed to remain in control as the group seized Ba'adweyne and Amara.