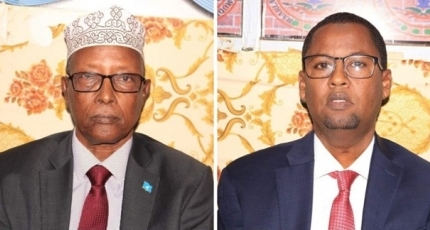 DHUSAMAREB, Somalia - Galmudug state has on Saturday elected the last two seats in the Upper House, paving the way for the Horn of Africa country to kick start the Lower House vote.

Galmudug picked all its 8 senators who will represent it in the 11th Somali Federal parliament, becoming the final Federal state to wrap up the election of the Upper House began in July.

Abdi Hassan Awale [Qeybdid] had an easy win after his opponent, Awil Nur Ali, withdrew from the competition at the last minute. All MPs present [83] voted in favor of the outgoing Senator.

Abdi Osman won the 2nd seat in the same way after his rival candidate Mahad Aden dropped out of the race. He garnered all 83 votes available after lawmakers voted in a show of hand.

Somalia's election is marred by voter fraud and irregularities that shadowed the people's hope to move out of the clan-based political system to democracy after three decades of war.

The last two seats are the last of the 54 seats in the Upper House which are now filled, and the five Federal States are expected to begin Lower House voting in the coming days.