The minister has announced that the troops will come back to the country when they complete their training courses in Eritrea. 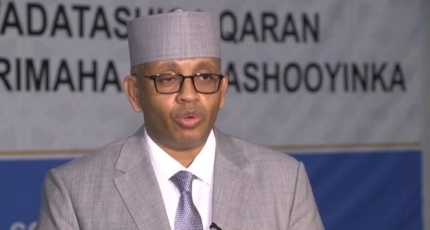 MOGADISHU, Somalia - The Federal Government has once again refuted claims that it sent troops to fight in the Tigray war under a secret plan amid a UN report confirming the presence of Somali soldiers in Ethiopia's northern region.

Speaking to the reporters in Mogadishu on Thursday, the country's information minister Osman Abukar Dubbe termed the allegations as false and politically motivated. He announced that the soldiers training in Eritrea will come back soon without proving the date.

"I call tell you that no Somali soldiers have been recruited by Ethiopia or deployed to take part in the fighting in the Tigray region against TPLF,” the minister said. “It is just a rumour and it’s baseless.”

The minister's statement comes as mothers claiming to have lost touch with their sons reportedly sent to Eritrea for military training by the Federal Government of Somalia staged a demonstration in Mogadishu on Thursday.

As families continue to demand their sons bring back to the country, outgoing Somalia's Federal Government has not explained the whereabouts of those men or confirmed whether they are dead or alive.