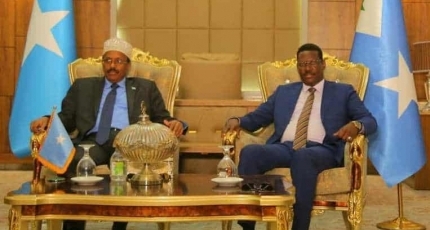 MOGADISHU, Somalia - Abdisalam Guled accused the acting Somali PM, Rooble, and Galmudug leader, Ahmed Abdi Kaariye alias [Qoorqoor] of being right-hand men – vigilantes – for the outgoing President Farmajo describing them as a potential threat in the midst of the discussion going on in Afisyooni.

His absenteeism from the leadership of Galmudug state for 45 days extends beyond what is deemed to be within an acceptable reality, according to Guled.

“Abandoning his duties as a state leader to serve his people and being on tour to Turkey and in the capital in a continuous cycle of activities or events regarded as pointless, Qoorqoor has lost his leadership while pursuing nothing commendable,” he said.

“He stood up for the outgoing President and that is what he had to – no matter what to take into consideration during this deadlocking situation.”

The former deputy chief of NISA, mentioned the way Farmaajo views Qoorqoor saying that the outgoing President has whispered to some of his close friends that if he were known how efficient the Galmudug leader is, I would not have hired lawyers for the maritime case dispute the country recently had with neighboring Kenya in the ICJ Court, according to him.

“The world raised eyebrows in shock of how Qoorqoor is one of the biggest barriers that hindering the conference in Afisyooni from progressing,” he added – recommending that he should be caring for his own duty in his state rather than meddling into the political power gain.