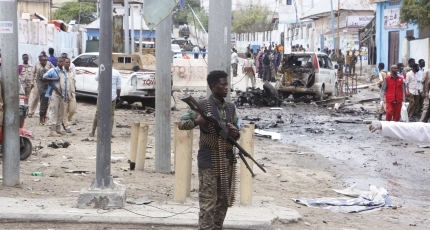 A Somali soldier secures the area after a car bomb attack at a Presidential Palace checkpoint in Mogadishu, Somalia, Sept. 25, 2

MOGADISHU, Somalia - In the past few months, there has been a surge in the targeted assassinations in the Somali capital, Mogadishu, raising serious questions about the lax security.

Despite ample warnings about Al-Shabaab attacks in Mogadishu during the election, Somali Police didn't bolster the security and made no effective plans to avert the insecurity incidents.

The slow in police vigilance contributed to the killings and attacks that claimed the lives of many people, including Abdiaziz Afrika, radio Mogadishu director who was killed on Nov 20.

He was targeted as he was leaving a restaurant shortly after the evening. He was killed by an Al-Shabaab bomber who detonated his explosives at his car door outside the restaurant.

After the state media journalist's murder, the seaside city has witnessed numerous killings, some carried out by Somali military soldiers against unarmed civilians in Mogadishu streets.

On Nov 25, At least eight Somali people have been killed and nearly 20 others injured, including schoolchildren, in a car bombing targeting a UN convoy in Somalia's capital, officials said.

Those murdered this month include two siblings and a member of the Somali custodial corps. The government said it arrested suspects in the murder and promised to bring them to book.

On Wednesday evening, Dec 15, two pistol-wielding men shot dead a businessman in Mogadishu's Wadajir nighbourhood. Hussein was killed as he left his house for a nearby mosque.

The gunmen escaped before security forces reached the crime scene, according to the eyewitnesses. The motive behind the murder remains murky as no group claimed responsibility.

In Mogadishu, the security situation has deteriorated since NOV 2021 and there have been killings and suicide bombings that killed dozens of people, mainly residents.

Al-Shabaab controlled most of Somalia, until 2011 when it was pushed out of Mogadishu by Somali troops backed by African Union soldiers, but still holds territory in the countryside.