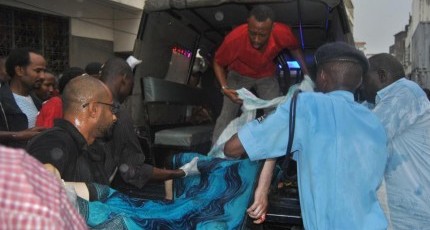 Two men, one armed with a pistol, rounded the corner of a building along Kuze Road in the Old Town area in Mombasa, shooting dead a German woman and wounding a Ugandan man, said police official Geoffrey Maiyek. Nothing appeared to be stolen from the two who had arrived Thursday from Nairobi, he said.

The German Foreign Ministry said it was investigating reports one of its citizens had been killed in Mombasa.

The shooting took place in the same area where a Russian woman was killed earlier this month, said Henry Ondiek, the Criminal Investigations chief in Mombasa. The Russian woman, two of her friends and a tour guide were confronted by three armed men on July 6.

The Kenyan coast has been hit by a wave of insecurity. Three gunmen opened fire indiscriminately in the Soweto slum in Mombasa Sunday night killing three people.

Al-Qaida-linked al-Shabab has vowed to carry out attacks on Kenyan soil to avenge the presence of Kenyan troops fighting the militants in Somalia. In September, four al-Shabab gunmen attacked an upscale mall in Nairobi, the Kenyan capital, killing 67 people.

The recent attacks led the British government last week to expand the travel warnings for the Kenyan coast. British citizens have been asked avoid all but essential travel to Lamu county, Tana River county and Tana River itself.

Earlier travel advisories warned against travel to areas within 60 kilometers of the Kenya-Somali border, the Somali enclave known as Eastleigh in Nairobi and Mombasa island. Those were issued following dozens of grenade and gun attacks blamed on al-Shabab.

The government fears that tourism, a key pillar of the economy, will be affected negatively by the travel advisories issued by the U.S. and Britain following attacks.

"We are really on our knees," said Lucy Karume in May, who chairs the Kenya Tourism Federation said in May. "The industry has been drastically hit. My biggest concern is that we are going to have to send people home."