General Odowa Yusuf Rage, the commander-in-chief of the Somali national army has confirmed to the state media that at least 25 militants are dead in the battle. 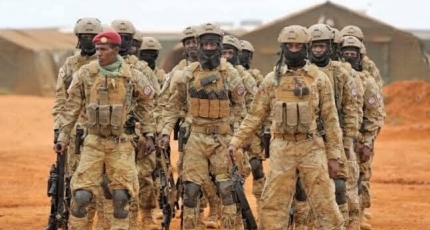 BELEDWEYNE, Somalia - A heavy fighting has erupted in central Somalia between Somali forces and Al-Shabaab militants on Tuesday morning, officials and residents said.

The fighting erupted after the Somali National Army (SNA) in the Bulo-burte district of the Hiran region attacked Al-Shabaab hideouts in El-ba'ad area, sparking an hours-long gunfight between the two sides.

General Odowa Yusuf Rage, the commander-in-chief of the Somali national army has confirmed to the state media that at least 25 militants are dead and several wounded in the fierce battle.

The SNA forces are in control of the war zone that connects Bulo Burde and Jalalaqsi districts in the Hiran region, where been the scene of several attacks by Al-Shabaab militants targeting the government forces traveling on the road.

The SNA killed at least 100 militants in an ongoing army operation in Middle Shabelle, south of Somalia, according to Rage who is leading the latest offensive aimed at driving Al-Shabaab out of the remaining areas under its control.