The disputed sea border is rich in oil and gas. Somalia argues its maritime boundary should run in the same direction as the southeasterly path of the country's land border. 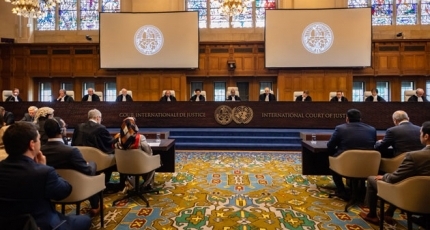 MOGADISHU, Somalia - The International Court of Justice (ICJ) is expected to announce the final verdict in the maritime dispute between Somalia and Kenya on Tuesday afternoon.

The Indian ocean border row soared in 2014 when Somalia filed a lawsuit in the Hague-based UN court which made a hearing in March 2021 without the presence of Kenya's legal team.

The high-profile maritime case was dragging on for 7 years, with Kenya said last week that it will not recognize the Court verdict, arguing it has no jurisdiction to decide the matter.

On Monday, the ICJ said that it will rule on the rift on Tuesday at 3:00 p.m. local time in Somalia. A team from Somalia led by the deputy PM is in The Hague for the announcement.

The Attorney General, Suleiman Mohamed Mohamud, said he was very optimistic that Somalia would succeed. All Somalis both at home and abroad are keeping an eye on the ICJ ruling.

The 100,000 sq km disputed sea border is rich in oil and gas. Somalia wants its maritime boundary should run in the same direction as the southeasterly path of its land border.

However, Kenya claims the border should take a roughly 45-degree turn at the shoreline and run in a latitudinal line to gain access to a larger share of the oil-rich maritime area.