The partners were alarmed by the fresh voilence that broke amid the electioneering period in Somalia, where the fragile government is copying with numerous challenges. 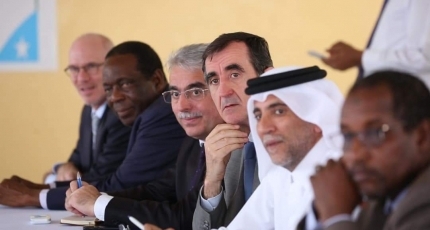 MOGADISHU, Somalia - The International Community has expressed concern over the ongoing fighting in Guriel between the government and Galmudug forces and Ahlu Sunna militia.

In a statement, the partners said the conflict was causing a humanitarian crisis and that it was diverting urgent steps to complete the parliamentary election and fight against Al-Shabaab.

“The International Community is concerned about the ongoing conflict in Guriel, Galmudug State. "The conflict is not only causing a humanitarian crisis for the residents but also derailing efforts to finalize the electoral process and the war on Al-Shabaab," they said.

The partners urged all parties in the conflict to immediately cease hostilities and end their differences through dialogue, saying they are ready to support if requested by the sides.

Fighting over the past 4 days killed over 120 people of people and displaced nearly 20,000. The statement comes shortly before Ahlu Sunna fighters have pulled out of Guriel last night.

Speaking to the media on Tuesday in Dhusamareb, Galmudug leader Qoor-Qoor accused foreign countries and some of the Federal states in Somalia of helping ASWJ in its comeback.

The leader accused Ahlu Sunna of igniting the war to score a political ambition and regain control of the territory it captured from Al-Shabaab in 2011 which is now under Galmudug.