The former Jubaland state security minister has defected to the Somali government in March of this year following negotiations. 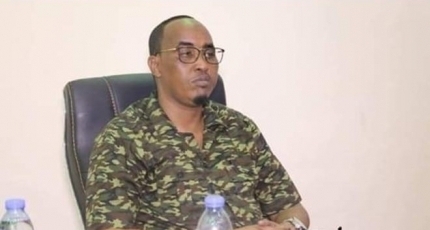 Sources told Keydmedia Online that Janan’s move came following a disagreement with the head of the National Security and Intelligence Agency [NISA], Fahad Yasin, who was responsible for his defection.

Janan changed his mind to stay with the government after outgoing president Farmajo and Yasin failed to fulfill the promise made for him over his surrender and was barred from running for a parliamentary seat.

He is currently at the home of Wadajir party leader Abdirahman Abdishakur Warsame in Mogadishu after fleeing from Villa Somalia paid hotel, fearing his safety after a fallout with the notorious spy chief.

Keydmedia Online could not independently verify this report. Janan who faces allegations of war crimes under international law and other serious human rights violations escaped from a NISA jail in Mogadishu in January 2020.

In the past few days, the military build-up was reported in Dolow district in the Gedo region after troops loyal to Janan back in control, causing panic in nearby Balad-Hawo which is held by the Somali government.

Gedo has been the flashpoint of the political dispute between Farmajo and Ahmed Madobe who are fighting for the control of the strategic region on the Somalia-Kenya border.