Djibouti (KON) - A senior officer of the Self-Defense Forces will take over the rotating command of the multinational anti-piracy mission off the coast of Somalia, a government source said Thursday.
News Keydmedia Online
3 July 2014 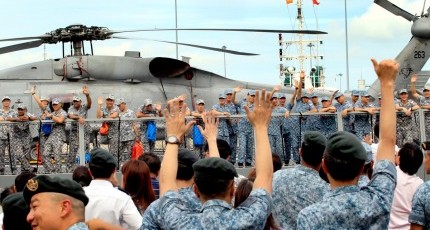 The Abe administration determined there are no legal problems with an SDF officer commanding troops of other countries despite Japan’s very strict rules on the use of military force, the source said.

From the legal perspective, SDF activities in the fight against piracy amount to no more than “the use of police authority” and SDF personnel are not being integrated into foreign forces that are using weapons, according to the government.

The Constitution bans Japan from using force to settle international disputes, and the SDF is not allowed to use force when involved in multinational peacekeeping operations, except in defending its own personnel.

The Cabinet is expected to approve the dispatch of the senior SDF officer soon, while also extending for another year the SDF’s anti-piracy mission, after obtaining consent from the ruling coalition, the source said.

How long the officer will be deployed has yet to be decided, according to the source.

Japan was asked in December to dispatch an officer to serve as commander, the source said. The mission’s commander changes every three to four months among the participating nations.

Maritime Self-Defense Force escort vessels and P-3C patrol aircraft have been taking part in the joint operations since 2009.

The MSDF will also set up a new unit of about 100 personnel to provide additional support for the vessels and aircraft, the source said.

The SDF effort is based in Djibouti.