The regional leader has been the flashpoint of the electoral controversy in Somalia and is resisting an offensive from the incumbent who seeking to extend his term in power. 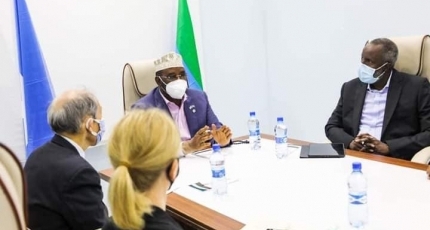 MOGADISHU, Somalia - The leader of Jubbaland Ahmed Madobe has met the US Ambassador for Somalia, Donald Yamamoto on Thursday in Halane base camp in Mogadishu.

The two sides discussed the country's political turmoil with Yamamoto persuading Madobe to cease the tension between him and Farmajo over the status of the Gedo administration and let the Federal government manage the polling process that will take place in Garbaharey.

Madobe previously demanded the withdrawal of federal government forces deployed to the region by Farmajo last year to conquer the region from Jubaland state.

"We discussed the political Impasse and finding a way to resolve some of the challenges facing the election process," Madobe tweeted.

The regional leader has been the flashpoint of the electoral controversy in Somalia and is resisting an offensive from the incumbent who seeking to extend his term in power.

Since his arrival in Mogadishu a day ago, Madobe received numerous political leaders in his accommodation, including Hassan Sheikh, Hassan Ali Khaire, and Abdirahman Abdishakur since, and Sheikh Sharif, who are united against the toppling of Farmajo.

Mogadishu is expected to host a much-anticipated conference between the country's head of state and regional states organized by the International Partners with the awaiting of Puntland leader who is yet to reach Mogadishu.

It has not officially announced the date the conference will due to take place.