Sources reportedly confirmed that Madoobe will accommodate inside the airport following his demand that the conference must be held in a safe place. 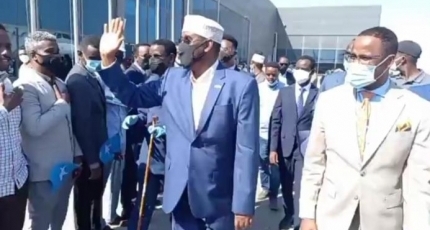 MOGADISHU, Somalia - Jubaland President, Ahmed Madoobe has arrived in Mogadishu on Tuesday ahead of the much-anticipated 6th round of talks on the long-running differences over the electoral process.

Madobe who is the flashpoint of the election process is expected to join his regional counterparts in the participation conference organized by international partners in Mogadishu.

An aircraft from the southern port city of Kismayo and carrying his armed security guards landed at Aden Abdulle Airport ahead of Madobe's arrival.

Sources reportedly confirmed that Madoobe and Puntland leader Said Abdullahi Deni will accommodate inside the Halane base following their demand for a safe place to hold the meeting.

The summit on the poll crisis is due to take place in Afisyoni near the airport, where the incumbent was elected 4 years ago by members of the 10th parliament in an indirect election.