During his stay in the Capital, Karie has engaged in many poll talks aimed to resolve the political standoff the country has experienced over the upcoming elections. 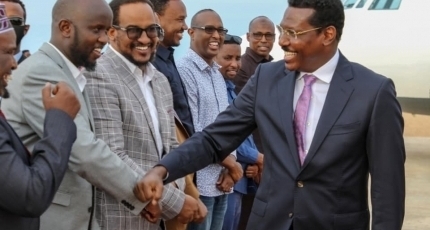 MOGADISHU, Somalia - The leader of Galmudug, Ahmed Abdi Karie alias (Qoorqoor), and a delegation he was leading returned to the state capital, Dhusamareb after staying in Mogadishu for several weeks.

A chartered plane carrying the regional leader landed in Ugas Nur Airport late on Sunday, where he received a warm welcome upon arrival from the Deputy Speaker of the State Parliament, Abdullahi Hirsi, some lawmakers, and ministries as well.

During his stay in the Capital, Karie has engaged in many poll talks aimed to resolve the political standoff that the country has experienced over the upcoming elections.

He has also met some of the representatives of the Intl Community, the presidential candidates, and civil society groups before his departure from Mogadishu.

Qoorqoor has faced criticism of being part of the setback for the elections to happen which the outgoing leader, Mohamed Abdullahi Farmajo failed to hold just in time as it used to be.

The cause of his return to his state is yet unknown but what is certain is that he has been out of Galmudug physically for weeks and now wants to resume the work.