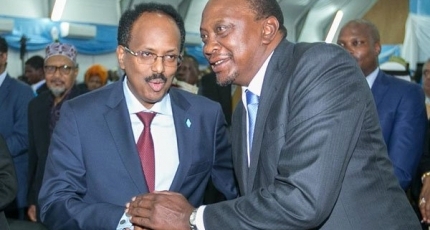 NAIROBI, Kenya - Kenya has announced on Monday it is preparing to reopen its embassy in Somalia as the two neighboring countries show readiness for full restoration of their diplomatic relations.

Somali Ambassador to Kenya Mohamud Ahmed Nur Tarsan is expected to return to Nairobi where Somalia plans to raise again its flag over its mission in the coming few days.

"The Kenyan government will proceed to reopen its embassy in Mogadishu as soon as possible," Kenya's ministry of foreign affairs said in a statement obtained by Keydmedia English Service.

The move comes four days after Kenya lifted direct flights to and from Somalia that have been on hiatus for almost a month due to the worst diplomatic row ever recorded between the two AU member countries.

Qatar has mediated Mogadishu and Nairobi to restore their ties on May 5, a deal that didn't yeild fruits after Uhuru halted the flights to Somalia in two days.

Kenya is one of the troop-contributing East African nations to the AMISOM, a strong force that has been protecting the weak UN-backed Somali government since 2007 from Al-Shabaab militants.

The outgoing president Mohamed Abdullahi Farmajo has cut off diplomatic relations with Kenya in Dec. 2020, accusing Nairobi of frequently meddlng in the country's internal affairs.