Kenya is one of the East Africa troop-contributing countries to AU mission in Somalia fighting Al-Shabaab since 2007. 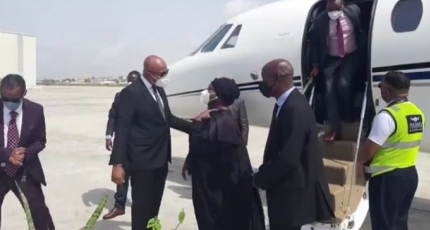 At the heavily guarded Aden Abdulle International Airport, Omamo was accorded a cordial welcome by the Minister of Foreign Affairs and International Cooperation Mohamed Abdirizak, and other Somali officials.

According to reports, Kenyan Foreign Minister will hold talks with Prime Minister Mohamed Hussein Roble and the outgoing President Mohamed Abdullahi Farmajo at Villa Somalia to discuss the bilateral ties.

Ahead of the arrival of Kenyan Foreign Minister Raychelle Omamo in Mogadishu, Farmajo issued a presidential decree barring the government from signing any deal with foreign companies or countries.

Kenya is one of the East Africa troop-contributing countries to AU mission in Somalia [AMISOM[ fighting Al-Shabaab since 2007 and protected weak government in Mogadishu.

The two neighboring Horn of Africa countries have a longstanding unresolved maritime boundary dispute with Somalia sued Kenya at the International Court of Justice [ICJ] in 2014.