Kenyan military base in Somalia comes under Al-Shabaab attack

The latest news reaching the KON desk from the area indicates that the Kenyan defense forces [KDF] are conducting operations to flush out Al-Shabaab from their base's nearby villages. 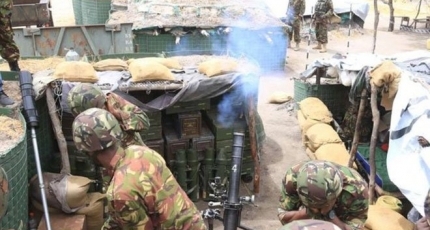 The fight came after Al-Shabaab members attacked a Kenyan army base in Taabta area on Thursday morning with both sides using different types of weapons during the skirmish.

The local residents said that they heard the sound of gunfire that caused losses on both sides and the civilians. Until now, the exact figures of the casualties remained unclear.

The latest news reaching the KON desk from the area indicates that the Kenyan defense forces [KDF] are conducting operations to flush out Al-Shabaab from their base's nearby villages.

Kenyan troops invaded Somalia in October 2011 to carry out Operation Linda Nchi, Swahili words that mean "Protect the Country" following a series of attacks and kidnappings against aid workers in the northeastern region.

After a failure in the objective to clear Al-Shabaab from border areas, the Kenyan government declared the operation completed in March 2012, and then KDF joined the AU mission in Somalia.

Kenya has now more than 4,000 combat soldiers in Somalia who are in charge of the Jubaland regions. They have been accused of conducting indiscriminate airstrikes in Gedo, killing civilians.

He said that the Federal Government of Somalia is determined to get rid of the Al-Shabaab Courts in the Lower Shabelle and Mogadishu within two years.