Southwest leader back to Baidoa after meeting Qatari envoy

Lafta-gareen has lately joined hands with his counterparts of Galmudug and Hirshabelle in their rejection of the extension term following clashes that erupted in Mogadishu. 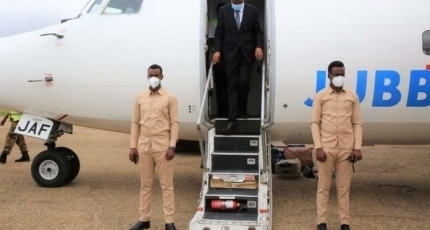 MOGADISHU, Somalia  - The Southwest State leader, Abdiaziz Hassan Mohamed alias (Lafta-gareen) who was in the capital in less than 20 hours returned to Baidoa city on Tuesday.

As Keydmedia Somali Service previously reported, Lafta-gareen has flown from Baidoa on Monday to meet the Qatari envoy, Dr. Mutlaq al-Qahtani in Mogadishu as part of the leaders of the regional states having talks with the delegation.

The envoy has an exclusive meeting with the regional states of Hirshabelle, Galmudug, and Southwest State and discussed the political impasse surrounding the country’s upcoming elections.

“I have had a meeting with the Qatari envoy and placed great emphasis on the ways to counter-terrorism and to resuming the poll talks,” he said.

Lafta-gareen has lately joined hands with his counterparts of Galmudug and Hirshabelle in their rejection of the extension term following clashes that erupted in Mogadishu.

He is apparently one of the most closely allied regional state leaders of the outgoing President, Mohamed Abdullahi Farmajo.

He was brought to claim the leadership of the Southwest in a fraud election followed by bloody mayhem that left the death of several civilians and others wounded.