The central city has been witnessing recurrent clashes for the past few days as local militia fighters battle against the national army and regional forces. 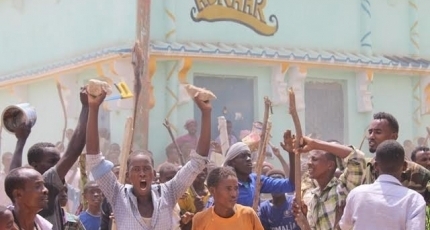 BELEDWEYNE, Somalia - Hundreds of people took to the main streets in the central town of Beledweyne on Sunday in a protest calling to cease heavying fighting erupted last night.

The angry protesters who were carrying banners with anti-HirShabelle state slogans burnt down tyres on the roads, disrupting public transport and businesses, according to the police.

They condemned the aggressive move by the Somali government and Hirshabelle state to attack Sunday morning on a powerful clan militia leader named Nur Dheere in Koshin area.

The people demanded an immediate cessation of the war on Col Nur Dheere and his militia group who took arms to prevent HirShabelle leader Ali Gudlawe from visiting Beledweyne.

Several people were reported to have lost their lives in the renewed skirmish in the central city which is under the guard of AU and Somali troops backing local regional administration.

The government was accused of using the national army to attack people in a peaceful town. The conflict in Hiran resulted from the violation of the HirShabelle power-sharing system.