The movement of vehicles and pedestrians has come back to normalcy through the areas fought in seem unapproachable with new barrels placed. 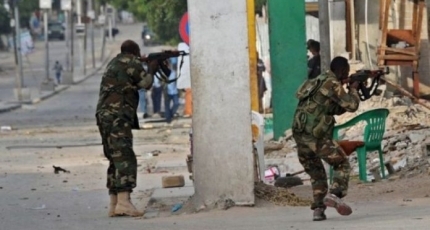 MOGADISHU, Somalia - It hard for everyone in Mogadishu to keep calm because of the scale of the fear caused by the escalating tension in the capital following a heavy gunfight that occurred on Sunday night.

To many, it looked like a nightmare that reflects back in the 90th when ousted the Siad Barre regime and deepened by the inability to witness another bloody mayhem that could fall this country apart once again.

The suffering endured over the last decades was seemingly forgotten until these days of uncertainty and in the midst of political power gain. But at least there is a sense of stable and normal life quickly resumed this morning.

The people of Mogadishu are used to this kind of incident and in spite of this capable of withstanding the harsh situations and what happened last night has no exception.

Troops loyal to opposition candidates and the government forces engaged in fighting that finally ceased on its own last night with the acting Somali PM calling on soldiers to carry out their duties in a speech he delivered.

The movement of vehicles and pedestrians has come back to normalcy through the areas fought in seem unapproachable with new barrels placed.

The heavy fighting that broke out yesterday in the north of the capital has taken a toll on the civilians with many reportedly fled to escape from the firing lines after the government forces launched an attack on the residence of ex-President.