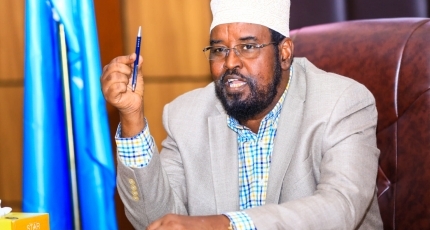 MOGADISHU, Somalia - The Jubbaland leader, Ahmed Madobe spoke for the first about the hearing of the maritime dispute case the country had with the neighboring Kenya at ICJ in Hague that entered the second day with the absence of the Nairobi administration.

“Something that can keep us strong and united as one people is what our brothers are doing there – fighting for justice and truth,” he said.

“We show our solidarity with them in doing that great job,” he added.

He highlighted that it's an obligatory duty that everyone must pledge his loyalty to his country when it comes to national interest putting the differences aside. Madobe is an ally of Kenya and one of the Somali political figures that closely linked to Nairobi.

Kenya pulled out of the case at the last minute after ICJ turning blind eyes to Kenya's latest request for a fourth-time delay in the hearing.

The bilateral ties between the two countries have deteriorated badly with Somalia summoning its ambassador in Nairobi and expelling the Nairobi envoy from Mogadishu.

Kenya has been seeking to settle the dispute out of court after it reached an MoU with Somalia in 2009 during the transitional period government led by Sharif Sheikh Ahmed.