The city is still under the Somali army and Galmudug state forces' control with the support of local militia that took arms to protect the people from Al-Shabaab. 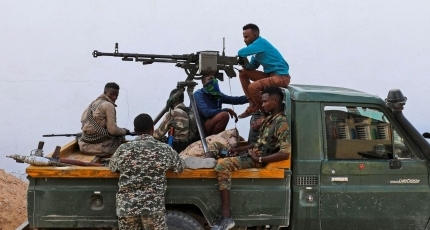 WISIL, Somalia - Reports from central Somalia indicate that many civilians began to flee their homes after Al-Shabaab amassed fighters near Wisil district, in the southern Mudug region.

The district is on the verge of falling into the hands of the terrorist group that has set up bases on the outskirts to prepare a large-scale attack on the military barracks, according to locals.

For the past two days, panic has taken hold in central town as hundreds of people flee areas where the Al-Qaeda-linked Al-Shabaab militants are continuing their advance towards Wisil.

Al-Shabaab recaptured two other districts in southern Mudug - Ba'adweyn, and Amara after government forces left their bases for Guriel town in nearby Galgadud to fight the Ahlu Sunna.

The comeback of the terrorists is attributed to the leadership failure and incompetence of the outgoing Somali president Mohamed Abdullahi Farmajo who used the SNA for political gains.

The US government, the most important partner of Somalia in the fight against Al-Shabaab announced it reviews its support for Danab elite forces after taking part Guriel battle against ASWJ.

The special troops were trained for the counter-terrorism operations in Somalia, operating along with the American forces who are now returning to the country after nearly a year.