Meet the first woman to run for president in Somalia 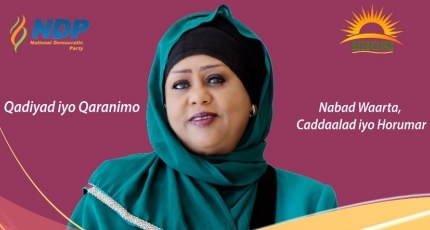 MOGADISHU, Somalia - Fawzia Yusuf Haji Aden became the first woman to formally declare herself a candidate for president in Somalia in the 2021 election in a male-dominated country in the Horn of Africa.

Born in Hargeisa, northern Somalia in the 1970s, Aden served as the Minister of Foreign Affairs and Deputy Prime Minister of Somalia between 2012 and 2014 under the leadership of former president Hassan Sheikh Mohamud.

At the end of the government's term, she founded and leads National Democratic Party [NDP]. The former diplomat has on Tuesday, July 13 announced she is the flag bearer for her party to run for the presidency in the upcoming presidential election due to be held on Oct 10.

"My soul aim is to breathe a new lease of life into Somalia. Our political ideology and believes are at the heart and soul of our political trajectory in deciding the best way Forward for my nation," she said.

She was also the first woman in Somalia to hold the post of deputy prime minister and foreign minister. The country is set to hold parliamentary and presidential elections this year, which have been delayed several times.

She has been accused of widespread corruption during her tenure in Hassan Sheikh's government. Aden facilitated many people for their trips abroad, mostly to Europe and North America, earning a lot of money from the smuggling market while she was foreign minister.

in 2013, the former Somali Foreign Affairs Minister Fawzia Yusuf Aden was accused of embezzling $ 4 million meant to pay the salaries of diplomatic staff at Somali embassies around the world.

It is not easy for a woman to hold the top position in Somalia, which has a history of a male-dominated political culture. Lasting peace, justice, and development is the slogan of her election campaign 2021. Former presidents and a PM are among the candidates in the race.