Farmajo has targeted several senior army commanders who opposed his attempt to rule the country with an iron fist. 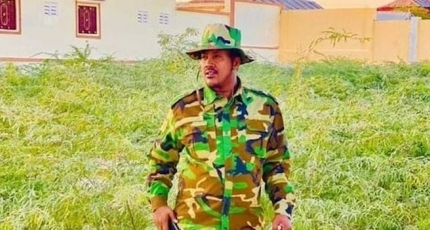 MOGADISHU, Somalia - Al-Shabaab has carried out a suicide bombing against a key Somali military base on Friday as the group is facing defeats in the ongoing army operations in the south of the country.

Somali army chief Gen Odowa Yusuf Rage confirmed that a suicide bomber drove a Toyota vehicle laden with explosives onto a military base in the city of Biyo-Adde in the Middle Shabelle region early in the morning.

The SNA boss has confirmed that four soldiers were injured in the foiled terrorist attack, which the Al-Qaeda-linked Al-Shabaab group has claimed killing ten military personnel.

Keydmedia Online has learned that the target of the attack was Col Saney Abdulle, the commander of SNA's 4th battalion, who has led troops who averted a coup attempt by incumbent Mohamed Abdullahi Farmajo in April 2021.

Abdulle has been on the target list of Farmajo since his troops fought against the dictatorship in Mogadishu with reports that sitting leader's loyalists have facilitated Al-Shabaab to launch the attack on the base.

There have been top army generals, including Gen Galal who served as a defense minister killed in assassination plots for opposing the country to fall into another dictator's hands.