Aided is being remembered as a fearless leader, a national treasurer, and a patriotic war hero who held his beloved country remove a merciless communist dictator Mohamed Siad Barre. 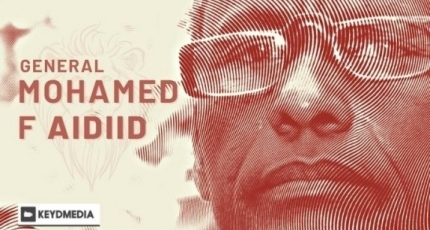 NAIROBI, Kenya - Today marks 26 years since the death of Mohamed Farah Aided, the great and patriotic general and diplomat, who led the rebirth of Somalia after freeing a communist dictator.

General Aided is etched in the memory of Somalis as an iconic war hero who made the ultimate sacrifice in service to his country. He is credited for the removal of Mohamed Siad Barre, a merciless tyrant who ruled Somalia for 21 years [1969-1990] with an iron fist.

As the nation remembers him on his death, Keydmedia Online throws fresh light on the towering persona of one of Somalia’s greatest generals and a man who stood out as the finest expeditionary commander of all time.

General Aidid was born in 1934 in the Mudug region of central Somalia. He took his primary and secondary studies in Mogadishu before leaving for Rome and Moscow to pursue higher education.

During the Italian colonial, he served in the police force in the 1950s before joining the Somali National Army [SNA] once regarded as one of Africa's best armies prior to the eruption of the civil war.

Aidid, who served with excellence was described as a highly qualified officer. He gained praise from his superiors who selected him to study advanced post-graduate military science at the Frunze Military Academy in Russia, an elite institution reserved for the most qualified officers.

After retiring from the army, General Aided later served as Somalia's ambassador to India, before deciding to take arms again to liberate the country and his people from the long dictatorial rule.

On June 17, 1990, he was elected as the chairman of the United Somali Congress (USC) in Mustahīl town in eastern Ethiopia, close to the border with Somalia, a move that catalyst his struggle.

After a long battle, on January 26, 1991, the General Aided-led revolt removed the bloodthirsty dictator Mohamed Siad Barre from power and kicked him out of Mogadishu, the country's capital.

He became a symbol of justice and freedom in Somalia for his courage to reject oppression and oust a tyrant who shed the blood of the people aimlessly to extend his stay in the power at gunpoint.

The Battle of Mogadishu also known as the Black Hawk Down incident was part of Operation Gothic Serpent. It took place on 3–4 October 1993 between US forces supported by UNOSOM II and the Somali National Alliance (SNA) and citizens of south Mogadishu.

On 3 October 1993, American soldiers from the 75th Ranger Regiment, the 1st Special Forces Operational Detachment-Delta, and the 160th Aviation Battalion attempted to capture Aidid's foreign minister, Omar Salad Elmim, and his top political advisor, Mohamed Hassan Awale, during a meeting taking place in a building in the immediate vicinity of Olympic Hotel.

The U.S. forces faced a battle that lasted for almost twenty hours and retreated from the area after being defeated. Somali forces shot down four American Sikorsky UH-60 Black Hawk helicopters using RPG-7s.

In the morning, a UNOSOM II armored convoy fought their way to the helicopters, incurring further casualties but eventually rescuing the survivors.

After the defeat, Admiral Jonathan Howe issued a $25,000 warrant for information leading to Aidid's arrest and UNOSOM forces began attacking targets all over Mogadishu in hopes of finding him.

Howe admitted that 96 American soldiers sustained injuries from the gunfight. Black Hawk pilot Michael Durant was captured by a mob of Somalis during the operation.