Speaking to the media on Monday, the council of presidential candidates announced that will lead a mass demonstration against the delayed elections and Farmajo’s bid to stay in office on February 26th. 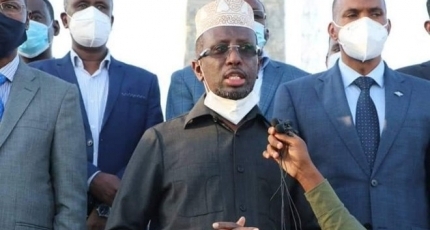 MOGADISHU, Somalia - Mogadishu is bracing for more protests seeking the removal of Farmajo whose constitutional mandate officially ended on February 8 without holding an election to pick a successor.

Speaking to the media on Monday, the council of presidential candidates announced that will lead a mass demonstration against the delayed elections and Farmajo’s bid to stay in office on February 26th.

The opposition Candidates have stressed the importance to hold a peaceful protest guaranteed by the constitution to express their views on the current stalemate over the country’s electoral process.

Farmajo's government last Friday stopped a rally announced by the opposition, leading to clashes that broke out in parts of the city between Somali armed forces and the candidates' bodyguards.

At least five people were killed and scores of others wounded, most of them civilians, and the city's main airport was hit by mortar shells prompting aviation officials to suspend flight service.

Mass protests engulfed the Somali capital for the second weekend in a row despite efforts by authorities to stifle the unrest triggered by the leaders at Villa Somalia who want to hold power at gunpoint.

The Turkish-trained Police forces known as [Haram'ad] cracked down hard on the demonstrators since last week, detaining dozens in the capital as part of Farmajo's attempt to silence the dissent voices.

Somalia is facing the worst political crisis as a result of the dispute over the electoral process with stakeholders accusing Farmajo of hijacking the election after forming a biased poll body and sending loyal troops to the Gedo region to rig the vote.

Somalia has been in crisis for decades since the ouster of former military ruler Said Barre in 1991 that plagued the country into a bloody civil war followed by piracy and terrorism.