Mursal asked to resign for violating the constitution

The Lower House leadership has sided with Villa Somalia and is currently working on a plot to extend the mandate of Farmajo unlawfully. 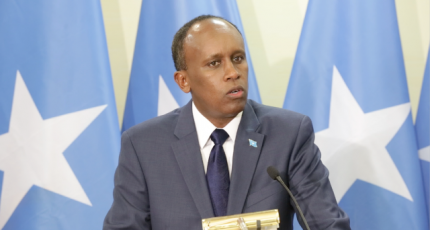 MOGADISHU, Somalia – A leading presidential candidate Abdinasir Abdulle has called on the speaker of the Lower House chamber of parliament Mohamed Mursal to resign for violating the constitution.

Abdulle has termed as illegal the suspension of opposition MPs from House sessions standing up to prevent an alleged illegal term extension for Farmajo, the outgoing president whose term ended Feb 8.

The aspirant described the chaos in parliament last Saturday as unfortunate and could lead the fledgling democracy in Somalia to end up in dictatorship rule just after 30 years of the ouster of the ex-military regime.

“Speaker Mohamed Mursal has shown his willingness to side with the illegitimate administration in Villa Somalia instead of protecting the rule of law,” said Abdulle.

He has warned the executive branch against continuing interference in the country’s legislative organ and called for the removal of the plain-clothed intelligence agents deployed at the Lower House.

The speaker was accused of planning to endorse an extension for current leaders in the parliamentary voting amid warning that the move would exacerbate the further constitutional crisis in Somalia.

“Condoning intimidation and act of violence against fellow members of parliament are unacceptable and will certainly have consequences” reads the candidate's statement in part.