The UN Mission in Somalia and international partners condemned the attack, warning that it could derail the momentum of the country’s already delayed elections. 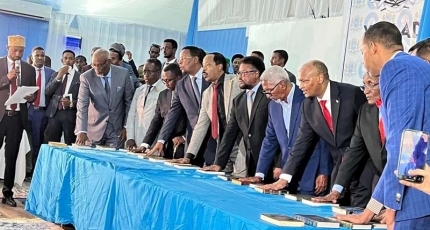 MOGADISHU, Somalia - The convening of the House is being hailed as a positive sign as it becomes the first branch of government to get a mandate as the Executive election delays

Newly sworn-in legislators are finally settling in in Somalia’s parliament, a certain move towards the much-awaited presidential elections later in the year, after a long and protracted process that at some point seemed to divide rather than unite the country.

But on Tuesday the new group of legislators was quickly reminded of the dangers lurking at every step of building back democracy after al-Shabaab militants fired mortars near the venue of their sittings in Halane, the fortified airport area in Mogadishu.

Some 297 MPs of the bicameral federal parliament were meeting to elect committee leaders when the al-Shabaab attack disrupted them. None of the legislators were injured but the attack could cause fear and discourage turnout for crucial government events.

The UN Mission in Somalia and international partners condemned the attack, warning that it could derail the momentum of the country’s already delayed elections.

“After a period of more than one year in which all Somali elected institutions exceeded their constitutional timelines, we are pleased that the new parliament is now in place.

“We strongly condemn the mortar attack, claimed by al-Shabaab, that occurred earlier in the day near the location of the swearing-in ceremony,” the Mission led by South African James Swan said in a statement, endorsed by several other countries including all of Somalia’s neighbors, the US, the UK, Turkey, Germany, and Egypt.

Nonetheless, the establishment of parliament is being hailed as a positive sign. It becomes the first branch of government that has a mandate as the Executive has sorely overrun its time.

“Somali politics, however dysfunctional, self-adjusts. We see Mogadishu yearning for change and buzzing with possibilities,” said Hodan Ali, a senior advisor to the mayor of Mogadishu and a political commentator.

“What matters now is selecting competent leaders expeditiously, starting with House Speakers who can legislate. We can’t afford another disastrous leadership,” she added.

The outgoing parliament was accused of playing to the tune of the federal executive. In 2018, Mohamed Osman Jawari quit his post as Speaker of the Lower House after falling out with the federal government under President Mohamed Farmaajo. He had been accused of working with foreign entities.

Last year in April, parliament controversially extended President Farmaajo’s term by two years before tensions with opposition figures forced him to rescind it. The same parliament agreed to reverse the extension.

The new MPs include some of those who were in the old legislature, but the new ones also include former spy agents.

“Today, the country overcame a constitutional crisis, instability, and political turmoil,” said Abdirahman Abdishakur, one of the new MPs who has also expressed presidential ambitions, after he took the oath of office.

“Our country and people cannot afford to waste more time and opportunities. I hope that members of the federal parliament who have been sworn in today will remain faithful to their oaths, be guided by their conscience, and discharge their duties with the best interests of our nation.”

Next week, the committee leaders of the new parliament, who act as interim speakers for the Lower and Upper Houses, will lead the MPs to elect their respective speakers. The Upper House of 54 members is expected to elect its Speaker on April 26, according to a tentative program issued this week. The Lower House of 275 members will follow a day later.

The entire parliament of the Upper and Lower House should have 329 members. But some federal states were this week still haggling on the venue and delegates to elect the remaining MPs under a delicate system of indirect polling where clan representatives cast secret ballots to choose.

There were signs of old chaos taking over when representatives from two camps exchanged blows during the committee selection. Opposition groups accused the federal government of sponsoring the chaos, allegations the government denied.

“To avoid a repeat of the circus the nation was subjected to yesterday, the 11th parliament must strictly enforce its rules of decorum and order. If the rules are lenient, enhance it,” warned Adam Aw Hirsi, a political analyst.

The Speakers’ positions are significant in Somali politics because it is them who organize a joint sitting of two Houses and oversee the election of the president in a secret ballot. In the past, presidential contenders often pushed certain candidates to Speaker as it could aid their election. However, a Speaker coming from your clan may impede your chances, so politicians may try to sponsor candidates from other clans.

Once the Speakers are in, exact dates for presidential elections will be announced. We are also likely to see a realignment of presidential candidates including others opting out. In 2017, up to 23 candidates expressed interest but only seven were serious runners into the second round of the polls that were eventually won by then-newcomer Farmaajo.

No incumbent has ever been re-elected in Somalia’s elections. And the country has also never held universal suffrage in 50 years, making indirect elections very unpredictable.

Meanwhile, candidates for Speakership will have to submit their CVs and pictures before Friday, May 7.

Other conditions are that candidates must deposit a fee of $40,000 with the central bank and present receipts to the committee; Those vying for the position of deputy speakers are expected to deposit $20,000 and each candidate is also required to submit a consent letter of acceptance of the outcome of the election.

The timeline and conditions were signed by the Chair of the Select Committee Abdirizak Omar Mohamed.