NISA and AU mission in deadlock over Halane security - sources

African officials have demanded the removal of two intelligence agencies inside the Halane compound due to security concerns raised by the intelligence chiefs in Halane. 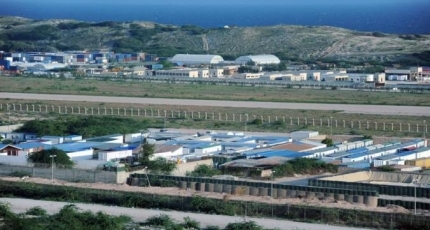 MOGADISHU, Somalia - Sources within the Halane base in Mogadishu say that a fierce dispute has erupted between the AU mission and Somalia's notorious Intelligence agency [NISA].

The brewing standoff is said to be rooted in the responsibility of security at the camp which houses western diplomatic missions, including the U.S. embassy and the UN agencies.

The AU mission showed that it has no confidence in the Somali intelligence agency after two gunmen dressed in NISA uniforms and with their IDs attacked Mogadishu airport next to Halane camp.

African Union officials have demanded the removal of the NISA officers inside the Halane due to security concerns raised by the intelligence chiefs in the heavily fortified seaside compound.

The dispute comes after the 21st of last month when Al-Shabaab militants attacked Halane Camp and killed 7 people, including five foreign nationals. The attack raised eyebrows in Halane's base.