Somalia's Intelligence boss Fahad Yasin who is the right-hand man of Farmajo had dispatched thousands of youths to Eritrea for training without informing their parents. 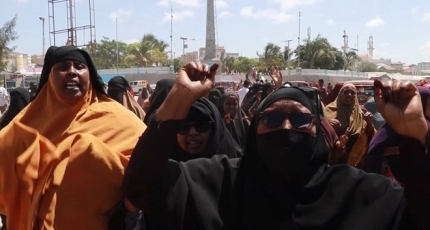 MOGADISHU, Somalia - The head of Somalia’s Intelligence Agency Fahad Yasin is in trouble after the sons he sent to Eritrea for a training mission had never returned home, leading parents to take to hold large protests.

On Sunday morning, hundreds of mothers and fathers gathered at Daljir Dahson status in Mogadishu to demand from the government to explain the whereabouts of their missing sons.

The protesters burned tires and blocked major roads with the police fired live rounds and tear gas to disperse the crowds. No injuries were reported so far.

The hopeless parents have accused the Somali government of turning a deaf ear to their calls on the return of the absent youths who were recruited by the NISA boss and taken to Eritrea by planes.

"The government has closed its doors to us, and now its forces are blocking us from expressing our grievances. We want their information whether they are alive or dead," the parents said.

Protesters called on the Somali PM, who is currently in Djibouti, to bring back their children who are reported to have been killed in the Tigray region while fighting along ENDF and Eritrean forces last year.

Some parents said their children had been tricked into taking them to Qatar, but deployed to Eritrea against their will and finally sneaked into northern Ethiopia to take part in the anti-TPLF offensive.

Until now, the government leaders remain silent on the issue which has rocked the country and the families are seeking answers.