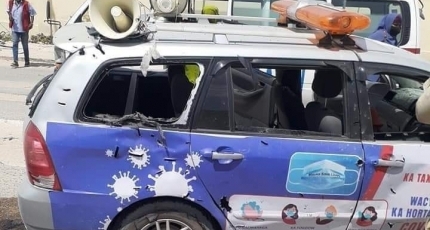 MOGADISHU, Somalia - Heavy explosion was reported in northern Mogadishu on Wednesday morning ahead of crucial election talks between the country's government and regional states set to kick off in the coming few days.

An eyewitness confirmed to KON that a remote-controlled landmine struck a vehicle designated to deliver public awareness about the Covid-19 pandemic as part of the measures to contain the spread of the virus in the city.

The driver of the car lost his life in the bombing while several others wounded. The vehicle was severely damaged by the IED as photos taken from the scene have shown.

There was no immediate claim of responsibility for the attack which comes amid a deepening political crisis in the Horn of Africa nation.