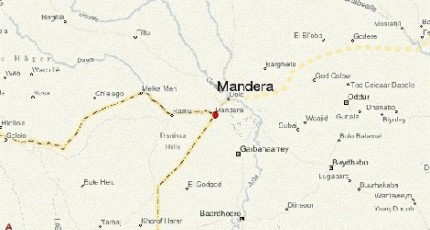 The fighting pitied Degodia and Garre clans and has displaced tens of locals who have sought refuge at government buildings.

“Last night (Saturday), they attacked a truck entering the town and killed one person, injuring three others,” Kerrow said. He added the fighting continued for the better part of Sunday leaving several wounded and others displaced.

“This morning, they started a heavy artillery attack from three sides on the town from 6 am, and is still going on.” Locals who called the newsroom said there was heavy gunfight between the two sides amid fears of high casualties.

Police stayed at a distance as the fighting intensified between the two clans. The officers said they were yet to access the affected areas to check on the casualties.

Kerrow condemned the attacks and called on the national government to contain the situation. He said a week ago, an attempt to attack Banissa town by the same bandits was thwarted with some casualties. He also blamed the government for the situation and demanded that it contains it.

“The government is aware that these attacks are committed by one side against another, in an attempt to escalate the longstanding political conflict between the Degodia and Garre clans,” he said.

He demanded that the government takes immediate actions to end the fighting that has caused many casualties.

“The army, General Service Unit, Rapid Deployment Unit, police and APs are based in town; yet artillery fire is going on in the town. It is inconceivable that they are unable to contain the situation.” The perennial conflicts between the Garre and Degodia clans of Mandera and Wajir counties have been attributed to political and historical border disputes.

Some 75,000 people have been left homeless and scores killed, according to Kenya Red Cross Society following the recent attacks.

Early in 2013 over 70 people were killed, tens maimed and tens of thousands displaced from the comfort of their homes, after a fighting pitting the two communities started in Mandera county and later spilled over to the neighboring Wajir county and lasted for six months before amicably peace deal was signed.

The fighting keep erupting after a brief lull with either side accusing the other of flouting the agreed deal.