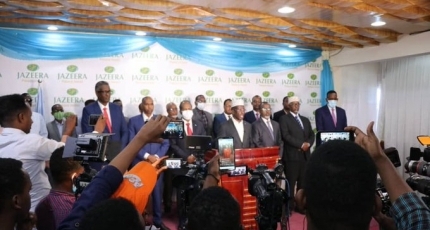 MOGADISHU, Somalia – The opposition candidates say they will hold an anti-government protest in Mogadishu in rejection of Farmajo’s bid to clinch the presidency after his term ended on February 8.

“The protest will be held on Friday and people will gather in different parts of the city to show their opposition against Farmajo who stays in office illegally for the sixth day,” said the opposition.

If held, it will the first major protest rally to take place in Mogadishu since the president’s mandate came to an end last week with his government failed to hold a timely election on February 8 to elect his predecessor.

The political leaders in Somalia have been at loggerheads over the electoral process since last year due to the lack of concession by the sitting president to resolve the contentious issues, including the poll body.

After serving 4 years in office, Farmajo has been accused of seeking an illegal extension and rigging the election after forming an electoral team that includes members of the intelligence and civil servants.

The outgoing president is cracking down on the opposition by using the security forces to attack their headquarters in Mogadishu, a move aimed at Silencing dissenting voices.

Due to the leadership failure of Farmajo, the Horn of Africa country found itself at an electoral crossroad and no solution in sight to end the deepening political disagreements over electoral processes.

The international community called for an urgent and constructive dialogue between the stakeholders to reach a consensus on the election crisis that if not resolved swiftly could plunge Somalia into chaos and a power vacuum.