Opposition casts doubt on PM’s neutrality ahead of poll talks

The statement calls on PM Mohamed Hussein Roble to stop foreign unnecessary trips and work on the election issue. 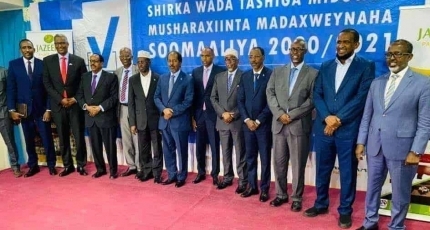 MOGADISHU, Somalia - The opposition Somali presidential candidates' union said on Sunday they are concerned about the behavior of the prime minister who appeared to be deviating from his neutral position on the country's ongoing electoral deadlock.

The alliance led by influential former presidents said in a statement seen by KON English Service the humble PM had come under increasing pressure from outside, which the opposition thought had stalled the election process and efforts to revolve the standoff.

The union urged Prime Minister Mohamed Hussein Roble to show independence in his leadership and stop unnecessary foreign trips after making two journeys to Saudi and Djibouti within this month amid crisis at home.

The candidates comprising of 15, all based in Mogadishu have called for the immediate start of the process towards a transparent electoral process that is acceptable to all citizens and the country's provisional constitution.

The opposition casts doubt on PM's neutrality ahead of fresh electoral talks between the government and the Federal States that are scheduled to kick off on May 20 in Mogadishu after Farmajo ditched his two-year illegal term extension due to pressure and outcry by stakeholders and the international community.

Farmajo and the five regional leaders failed to break the election impasse during series of meetings in different places in the country, a move that weakened the capacity of forces that are meant to assume full control of national security this year from AU soldiers [AMISOM].