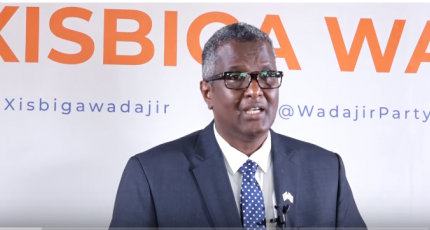 The union of the candidates has proposed the creation of a national council comprising speakers of parliament’s two houses, Federal States, civil society, and opposition to prepare for an inclusive election.

The opposition leaders said they will no longer recognize Farmajo as a legitimate president and accused him of being an obstacle to the implementation of the 17 Sep agreement signed in Mogadishu.

Villa Somalia on Tuesday announced that Farmajo called for another meeting in Garowe on February 15 with the Federal states' heads to reach a consensus on the electoral stalemate after Dhusamareb talks collapsed.

Abdirahman Abdishakur Warsame, the leader of the Wadajir party and a presidential candidate said Farmajo doesn't have the mandate to convene a meeting on the national matter since he lost impunity and legitimacy.

“Council of Presidential Candidates will only accept the outcome of a conference they are part of. Farmajo can take part just like any other candidate,” said Warsame on Wednesday in a statement.

He has blamed Farmajo for holding power in a bloodless coup and called on the international community to stop supporting a term-ended president to avoid violence in the long-chaotic Horn of Africa country.

Farmajo wasted a golden opportunity to hold an inclusive election in Somalia after rejecting a deal with the leaders of the Federal States during Dhusamareb talks two days before his mandate came to an end.