Opposition voices concerns over Farmajo’s interfering to rig the election

They have greatly welcomed the move by PM Roble to sack the deputy NISA boss Abdullahi Kulane and airport intelligence commander on Friday. 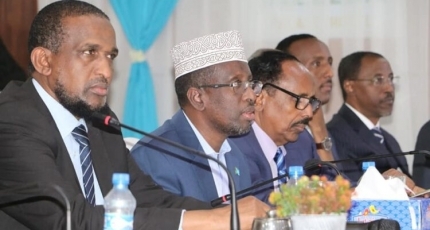 MOGADISHU, Somalia - The union of Somalia's opposition presidential candidates has expresses concerns over the continued election meddling by the outgoing president Mohamed Abdullahi Farmajo, who is seeking a second term in office.

"The Union of Candidates calls on the outgoing President Mohamed Abdullahi Farmajo to refrain from violating the constitution and his continued interference in the electoral process to hold free and fair elections on time," they said in a joint statement.

On the other hand, the presidential candidates led by former presidents and PM welcomed the sacking of two NISA officials - Abdullahi Kulane who was serving as a deputy and HR director, and airport intelligence Abdiwahab Sheikh Ali on Friday.

The office of the PM said in a statement that the dismissal was in response to the officials' blatant violation of Roble order not to block citizens of the constitutional right to movement and travel as the country is in an electioneering period at the moment.

Kulane who faces grave accusations, including the disappearance of NISA's cybersecurity head Ikran Tahlil and dozens of spy agents is a close relative to Farmajo and he was trying to bar opposition figures from running for parliamentary seats in the Gedo region.

He was fired after denying ex-Gedo governor and other politicians access to leave Mogadishu airport for Garbaharey on Friday, the latest attempt that was intervened by Somali PM Roble.