PM meets with Somali and AU police chiefs ahead of election

The office of the prime minister is in charge of the country's elections and security after Farmajo failed to deliver his national duties during his tenure. 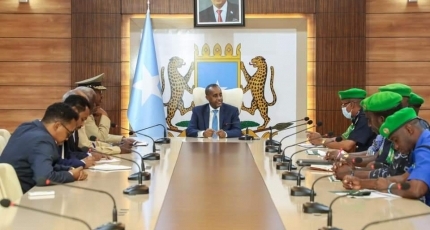 MOGADISHU, Somalia - Prime minister Mohamed Hussein Roble held a meeting at his office with the commissioners of Somali and AU police on Sunday ahead of the Somaliland election.

The PM asked the security chiefs to ensure the protection of the polling station for the election of the Somaliland seats in the Upper House which will take place in Mogadishu this week.

The Somaliland SIET was in attendance at the meeting which comes as the candidates vying for the Senate seats will deliver their campaign speeches at the electoral delegates on Monday.

Somali and AMISOM police will be in charge of the security for the northern regions Senators election that will continue for three days, starting from Sep 28, according to the poll schedule.

Since Somaliland claims secession, its representatives in the parliament are usually elected in Mogadishu. The northern regions got 11 seats in the Senate.

It's a move towards completing the Senate election in Somalia after months of confusion and disputes among the political stakeholders. The country is preparing for the Lower House vote.

The 45-seat Upper House and the 275-member Lower House will jointly elect a new president by the end of the year in accordance with the May 27 electoral agreement signed in Mogadishu.